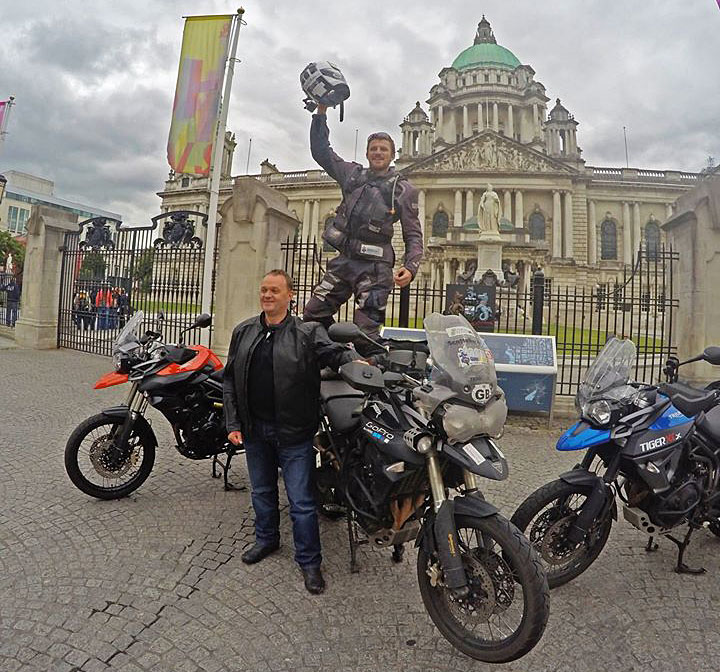 “We are delighted to confirm that 2moroRider, Rhys Lawrey, completed his epic journey across the globe on Friday 17th July. Covering 56,700 miles, 71 countries and six continents, Rhys has brought home not one but two world records.

The successful completion of Rhys’ trip, which he did on a Triumph Tiger 800XC, sees him become both the youngest person to circumnavigate the world on a motorbike and the world record holder for the most consecutive capital cities visited on a motorcycle.

The monumental trip culminated at the Houses of Parliament, where he was greeted by Lord Digby Jones, Triumph’s chairman, Councillor The Lady Flight, Lord Mayor of Westminster, and representatives from The Prince’s Trust – his nominated charity.

Starting his journey aged just 22 in May 2014, Rhys has since travelled some of the best and worst roads in the world, tackling extreme temperatures, treacherous terrain and gruelling weather conditions. His trip saw him travel through deserts, mountains and jungle, no mean feat, even on his trusty Tiger 800, aptly named ‘Tigger’. The journey also saw him celebrate two birthdays, turning 23 in China and 24 in Amsterdam.

‘Tigger’ didn’t miss a beat either, with only standard service items required over the 56,000 plus miles. This is a real testament to the durability and reliability of the Tiger 800, on such an arduous journey.

For Rhys a significant motivator for the trip was about inspiring other young people and as such he has been raising money for the Prince’s Trust on route.

Founded in 1976 by The Prince of Wales, The Prince’s Trust has become the UK’s leading youth charity, offering a range of opportunities to 13-30 year olds who are unemployed or struggling at school and at risk of exclusion. Their goal is to inspire young lives, which fit perfectly with Rhys’ overall ambition.

We would ask all dealers to dig deep and make a donation to Rhys’s just giving page, to mark this amazing feat. You can donate atwww.justgiving.com/2mororider/donate

You can also find a wealth of images of Rhys’ trip at https://www.facebook.com/2moroRider and we would encourage you to share his story through your own social channels and website.”